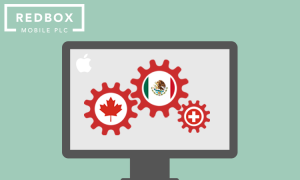 Apple has recently expanded the Storefronts that are eligible for Search Ads. Apple Search Ads first launched just over a year ago and was originally only live in the United States, but Search Ads is now available in Australia, New Zealand, United Kingdom, Canada, Mexico, Switzerland as well as the United States. The addition of Mexico, Switzerland and Canada on 17th October 2017, was the first expansion, by Apple, outside of App Store territories in which English is the dominant language; and, therefore, this development presented a novel challenge for Apple App Store app advertising.

At Redbox Mobile, we were ready for the launch of the new territories with our clients’ campaigns set up waiting to go live at 10:00am PST on 17th October; within the first hour of the new Search Ads territories launching, our campaigns were generating Conversions and Ad Impressions (see Figure 1.). Our first week data suggests that it is worth expanding your paid app marketing to include the new territories. The campaigns were defined by low Average Cost Per Taps (CPTs) and Average Cost Per Acquisitions (CPAs), which were, on average, 2.96 times and 2.16 times cheaper than the clients’ local campaigns, respectively. 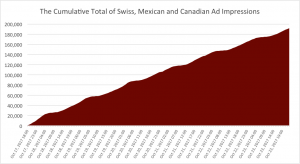 Figure 1. A Graph to Show the Cumulative Number of Ad Impressions generated by our Swiss, Mexican and Canadian campaigns in the first week the new territories went live.

In the first week, we observed Canadian, Mexican and Swiss Average CPTs and CPAs significantly lower than our campaigns, in the established territories, for the same app. For example, we found that the Average CPAs of a Sports Betting App and Casino App were 2.72 and 2.35 times cheaper in Canada than in the UK (see Table 1.).

Table 1. A Table to show the Average Cost Per Tap (CPT), Average Cost Per Acquisition (CPA), the Tap Through Rate (TTR) and Conversion Rate (CR) of Search Ads campaigns running in the United Kingdom and Canada for the same Sports Betting App and Casino App.

The lower Average CPAs in the new territories are not unique to betting and casino apps; we have also observed lower CPAs and CPTs for an American news app. In the first week of Mexican, Swiss and Canadian campaigns going live, the Average CPAs of new territories were 2.84 times cheaper than the US campaign.

Table 2. A Table to show the differences in Average CPT, Average CPA, TTR and CR of Search Ads campaigns running in the United States, Canada, Mexico and Switzerland for the same News App.

Apple Search Ads operates a second price auction CPT model, and therefore, the price you pay for a tap is partly determined by how many competitors there are in your app’s market place and the amount your competitors are willing to pay for a click. When a new territory is launched by Search Ads, the competition is undoubtedly smaller, when compared to the established territories; and, because of this, new territories are often characterised by low Average CPTs.

Want to know more about how to promote your app in multiple territories in Search Ads? Get in touch with Redbox Mobile to find out how we can get your app to the top of the Canadian, Mexican and Swiss App Stores’ search results. Alternatively, set up a Global App Campaign on our Blackbox platform, which generates campaign keywords and uses machine learning to adjust CPT Bids and optimise the campaign budget with real-time reported statistics, in each territory.