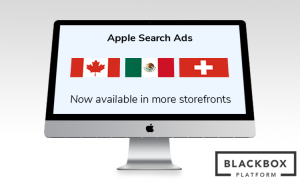 Search Ads is expanding to Canada, Mexico and Switzerland; Apple Search Ads will go live in these new territories on 17th October at 10 a.m. PDT (that’s 18:00 p.m. BST, later today!). Apple Search Ads allows developers and marketers to promote an app at the top of the iOS App Store search results, easily and efficiently. And, with more than 65% of all app downloads coming directly from App Store searches, Search Ads provides a great opportunity to direct relevant customers to your app.

Originally launched in the United States just over a year ago, Search Ads will now be available in Australia, New Zealand, United Kingdom, Canada, Mexico and Switzerland. The addition of Canada, Switzerland and Mexico is the third expansion of App Store territories eligible for Search Ads.

Although the additional territories give app developers and app marketers greater opportunity to promote an app and reach new customers, the new additions will present novel challenges for Apple app advertising. The launch of Search Ads in the Canadian, Mexican and Swiss App Store is the first expansion outside of App Store territories in which English is the dominant language. The learning curve will be even greater for Canadian and Swiss campaigns since both Canada and Switzerland have multiple widely-used languages. In preparation of Search Ads going live in the new territories, the help pages have been translated into Spanish, Canadian French, Swiss French and Swiss German.

The expansion of Search Ads in Canadian, Mexican and Swiss App Stores is exciting and is suggestive of further planned-expansion in other French, German and Spanish speaking App Stores. At Redbox Mobile, we are looking forward to the future expansions from Apple and expanding our clients’ user reach.

Want to know more about how to promote your app in the new App Stores eligible for Search Ads? Get in touch with Redbox Mobile to find out how we can get your app to the top of the Canadian, Mexican and Swiss App Stores’ search results. Alternatively, set up your own campaign on our Blackbox platform, which generates campaign keywords and uses machine learning to adjust CPT Bids and optimise the campaign budget with real-time reported statistics.