The Redbox Toolbox app was released on the App Store just over a year ago in October 2019 as a free DIY App Store Optimisation (ASO) tool. Initially created as an internal tool for our account managers to help structure metadata for their clients, it was then adapted to fit smaller iOS developers who could use the Toolbox to write their metadata.

The Toolbox app itself is a single iOS binary that has been enabled to run on Macs using the Catalyst framework introduced at WWDC 2018 and released to developers a year later. It essentially allows apps that have been optimised for iPad to run on Macs with no big changes. On top of the existing iPad app, Apple allows developers to add Mac specific features such as Toolbars and Touch Bar support which is exactly what we did with the Toolbox.

Earlier this year, we released version 2.0 of the Toolbox - the biggest update yet. This brought about some huge design changes throughout the whole app to make it more consistent and, more efficient for app developers to use. This new update brings the Toolbox up to version 2.1 and focuses on new features introduced in iOS 14 and the huge macOS 11 Big Sur update.

macOS 11 Big Sur marks a huge step away from the classic Mac operating system in terms of aesthetics. Every part of macOS has been redesigned to more closely match its iOS counterpart with adaptions where necessary. One important detail that hasn’t gone unnoticed is how existing Mac apps don’t need to do anything to get the new design. In fact, we could have not updated the Toolbox app and it would still look like it was made for Big Sur.

The biggest change to iOS this year was the introduction of widgets on the Home Screen. Unlike the previous Today View widgets, these can be added directly to a user’s Home Screen and must be built using SwiftUI - Apple’s new declarative UI framework. For the Toolbox, we created the maximum allowed number of five widgets.

The first of these new widgets is the ability to view your favourite apps and then jump straight to them in the Toolbox when tapped. There are two slightly different variations of the widget. The first of these allows for a single favourite app and storefront to be selected. This comes in small and medium sizes. The second of the two displays either your first 8 or 16 favourite apps depending on whether the medium or large widget is added.

The Rankings widget allows you to configure a favourite app in a storefront to see where it ranks in each of the categories it is listed in throughout the day. This is available in the medium widget size.

The Top Charts widget can be configured with a category and storefront. Depending on whether the medium or large widget size is chosen, you’ll see the top 5 or 10 apps. Tapping on one of the top apps will then open it in the Toolbox.

Another iOS system feature we introduced in version 2.1 was support for Siri Shortcuts. Announced as part of iOS 12, Siri Shortcuts allow users to interact with apps using Siri or the Shortcuts app without the requirement of opening the parent app.

Siri Shortcuts and Widgets both use a common Intents file within the app binary for their configurations; since they are so similar, we made all of the Widgets available as Shortcuts too. If you setup both the Widget and Siri Shortcut, you’ll notice the configuration screens are very similar.

In this update, we also took the time to implement a recently introduced iPad exclusive feature. Released as part of iPadOS 13.4 in March this year, the update introduced cursor support for trackpads or mice on an iPad. By default, Apple automatically applies iPadOS cursor specific animations to the top navigation bar items and other standard UI elements with no implementation required on the developer’s behalf.

It’s key to refer to Apple’s Human Interface Guidelines (HIG) when implementing something like this and not to go overboard with pointer effects. We added support for the iPadOS cursor throughout the Toolbox app where we deemed necessary. For example, on the App Overview, it provides a really nice effect on the storefront toggle.

Pairing nicely with the new pointer support in this update, we added keyboard shortcuts throughout the app for quick access to common functionality. This is great for users who have the Magic Keyboard paired to their iPad who are best placed to take advantage of these two great new features. Mac users and iPad users with the standard Smart Keyboard (or a third party’s) can also use the new keyboard shortcuts. All shortcuts can be viewed on iPad by holding down the Command key on any screen (if available). 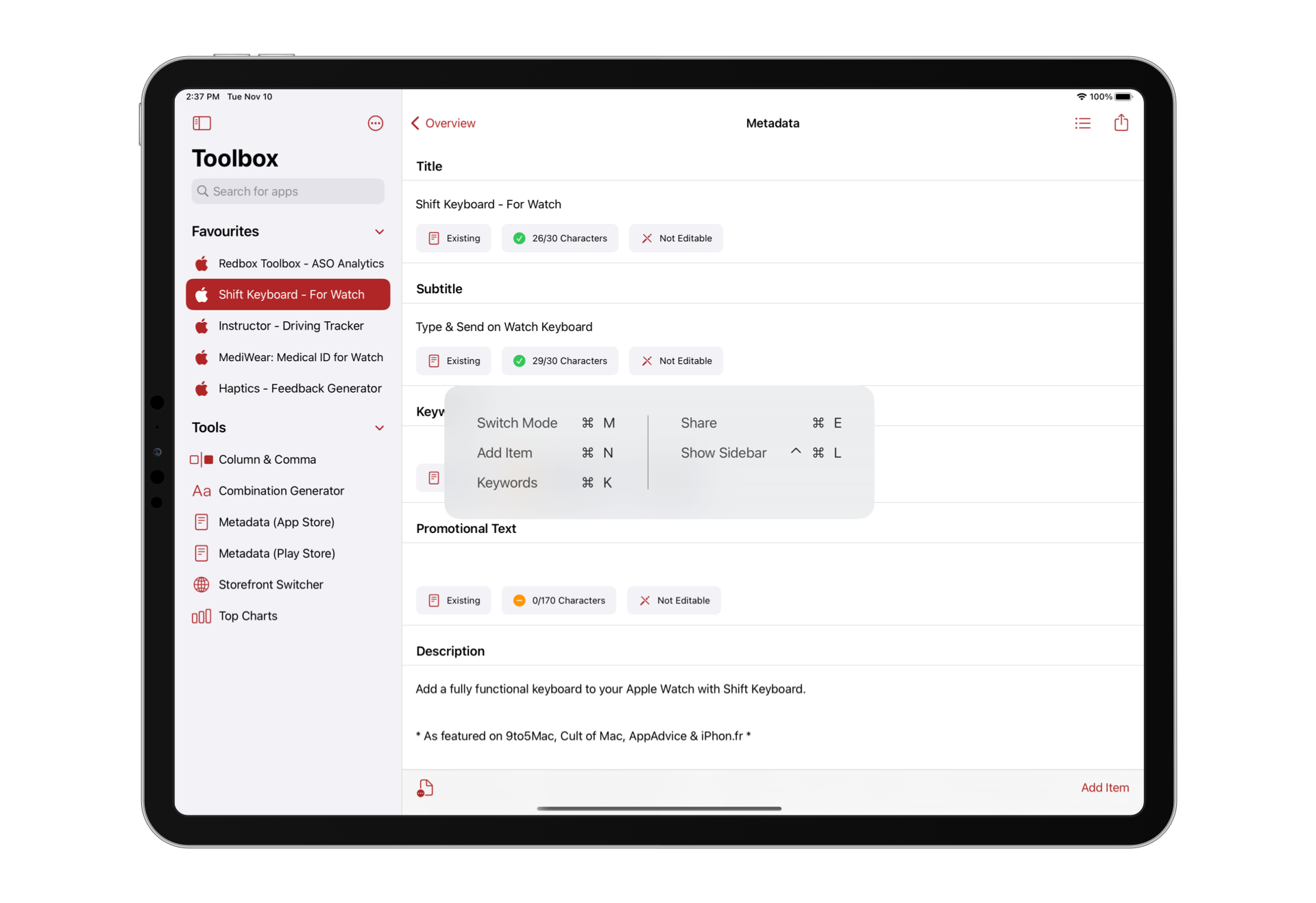 With macOS 11 Big Sur, Apple completely revamped the way app icons looked on all of their system apps. All the uniquely shaped icons were replaced by the ‘squircle’ design we’re so used to seeing on iOS.

In version 2.0, we had already updated our app’s icon to better match the Big Sur design. When it came to working on the Big Sur update, we took the time to perfect the design further to make it more closely resemble an Apple system app.

How do I get the Toolbox?

The Redbox Toolbox app is available on iPhone, iPad, Mac and Apple Watch through the following link: https://apps.apple.com/app/id1455829852

As it’s a universal app, you only need to download the app on one of those platforms and you’ll instantly own it on all the other platforms too. Your settings, favourite apps and data for those favourites sync across devices automatically using iCloud too.

If you’d like to be one of the first to test new features for the Toolbox, you can subscribe to the beta through TestFlight: https://testflight.apple.com/join/qXlnBJRg