Welcome to the space age: Samsung A9

The All New Samsung A9

Yesterday marked the release of the brand-new model of Samsung and considering we gave such a lovely spread to new iPhone XR and XS, we thought it only fair to do the same for the brand-new Samsung A9.

Released as a cheaper version of their flagship Samsung S9, the A9 features an aspect never seen before on a phone: a 4-lens camera. Unusual? We thought so, but Samsung branded this product by saying it was “optimised for Instagram” and aimed at the younger generation looking for 4 x the fun with their new phone. These 4 cameras are all very clever and have different roles in capturing that #instaworthy photo.

The first camera is an “Ultra-Wide Camera” ranging up to 120° in order the get widest view possible. The second is a “telephoto” lens that gives you a 2x optical zoom, taking you one step closer to becoming an astronomer from your phone. The third is labelled the “main camera” which is also used to get the best photo results in poor lighting. It’s the perfect lens for all you nightclub selfie fans. The fourth and final lens is the “depth camera” which allows you to focus on all the smaller aspects of your photo and get those crisp landscape shots.

Along with the camera features, Samsung have also released their new device in three new exciting colours. Caviar Black, Bubble-gum Pink and Lemonade Blue. These new shades give the phones a slight space age feel along with the familiar Samsung shape and sophistication. The range has also followed forward with the buttonless style leaving the screen to be exactly that, just a screen. But not just any old screen, the Samsung A9 is home to a ‘6.3” FHD+ Super AMOLED infinity Display’… No, we didn't know what that meant either, but we’re willing to bet that app screenshots display like a dream on it. 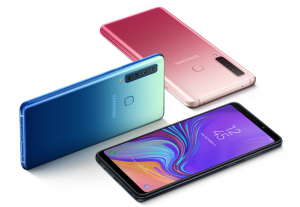 A few other notable features include a highly responsive mobile Octa-Core processor with 6 or 8GB RAM. It also includes an optional 512GB of extra storage via microSD cards and a longer battery life..

If you’re interested in purchasing this state of the art device, it will set you back around £549. However, looking at the spec… it’s #defo worth it.

Alternatively, if you’ve got an app and you’re interested in seeing how to make your app’s screenshots look great on the new Samsung or iPhone, get in touch today to chat to our team. Call us on 01488 682442.