Since its launch in 2008, the Google Play Store has been growing rapidly and now has over a billion users. Over eight billion apps are installed from Google Play every month. This shows how much competition there is on the platform for app developers and marketers today.

Numbers aside,  consider things from a normal Google Play user’s perspective. When you look for ‘photo editing’ apps on Google Play, there are hundreds of potential results, but only the top few are going to win your attention ( or those with a star rating of four and above). Out of these,  the top two slots in results are reserved for ads, which further adds to the competition.

This means that it has become imperative for every app owner to get their apps discovered quickly, by the right audience who will not only download but also use your app. This is where Google’s App Campaigns  (formerly known as Universal App Campaigns) come into the picture. The idea behind these ads is to target a high-intent, high-converting user base for your app.

Although launched back in 2015, Google App Campaigns is being continuously improved for better user experience. For example, if a user searches for a specific app such as ‘Canva’, then an ad won’t appear because there’s a very high chance that the app would appear in the search result anyway. In this case, you’ll not have to pay for clicks received on organic results.

However, when a user searches for ‘image editing’ apps then your ad will likely be in that list if you’ve optimised it for search and discoverability to rank better than the competition.

As a developer, you have three clear-cut benefits to reap from Google App Campaigns:

Having talked about the importance of Google App Campaigns and the advantage it brings to developers, we’ll now move on to discuss how you can optimise these ads to improve results on KPIs such app installs.

Understand and choose the right type of app promotion campaign

If you’re not aware of the campaign types, here’s a quick explanation of each type:

From the mentioned three campaign types, universal app campaign is extremely popular amongst developers. That’s because this campaign type promotes the app on a wider network, reaching more users.

Want to see how your ads look on different networks? Check them out here.

However, if your objective is ‘clear measurability’ on your ad campaign, Universal app campaigns shouldn’t be your campaign of choice. The reason being that your ad is being served on various channels at any given time and it can be difficult to point out which one works best for you.

In that case, you should rather stick to creating ads just for the Google Play Store, which will allow you to track performance accurately and optimise results better. The goal of your campaign should be clear.

For example, if you want complete control over your campaign by promoting your app on a single network mobile app installs should be the campaign type you should opt for. 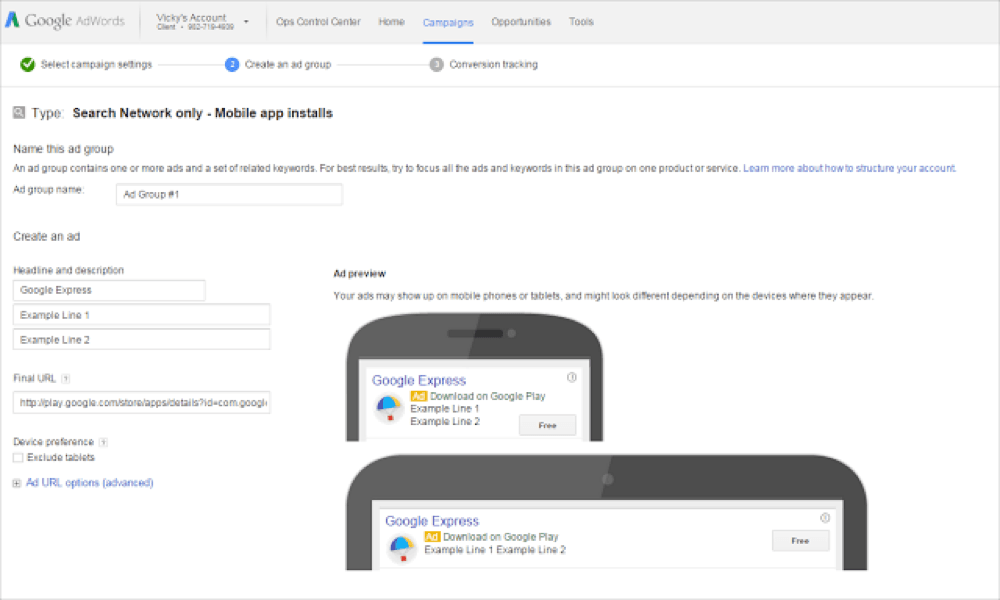 Google Play Store optimisation is a must

The content that gets displayed on your ad, such as images, title, and text, are gathered from your app store page. Ruling the Google Play charts requires looking into a number of elements such as app icon, app title, and app descriptions.

Right from the number of words people type in to make a search and how they search (via company or brand names), understand your target user’s search patterns. Optimise your app title and description accordingly.

The majority of people search Google Play in a pattern that follows their main search with ‘app’. For example, ‘fitness’ + app, or ‘dining ' + app. We conducted research on this search behaviour and you can see the results here.

At the same time, it is twice as important to understand your competitor’s strategy to reach the same target users. Identify the keywords they are targeting, the app titles they have used and how they have changed their app descriptions so far to get better results. Learn, get inspired and smartly use this data to optimise your store listing for better results.

David Janner of MAKE APP Magazine experimented going local. By localising his app’s name, the keywords, and sometimes the top line in the app description, he won a massive 767% increase in downloads on his app.

Now imagine applying localisation to your Google Play Search Ads. Seems like a total winning strategy, right? Even Google advises that you should opt to target the local language so that globally every viewer gets to see your app’s ad in the appropriate, understandable language.

Track results only after a week

Once you have set up your Google Play Search Ads campaign, it’s time to monitor results - but don’t start looking for performance metrics in just a day or two. It takes at least seven days for your strategy to show positive or negative results.

After the first seven days, start testing your ad settings and targeting based on the campaign performance. Tailor your campaign based on performance data for better optimisation.

An interesting point to note here is that Google helps you to select your daily budget and your bid strategy. So, while you might not want to change your keyword strategy before a week’s time, you can keep changing your daily budget (based on what is being most searched that day) to get the maximum return on your investment.

Nordeus, for one of their games ‘Top Eleven’ chose to serve Google Play Search Ads in  17 languages across the world. As a result, the first 30 days of their campaign witnessed 892% more app installs than it would have seen organically. And, the retention rate for the app was 51% higher as compared to app installs from other campaigns.

This is an excellent example of how optimising Google Play search ads can not only help your app get discovered but can win you significantly higher installs as well as retention.

Have you joined the optimization bandwagon yet? If yes, let us know how you benefited from it.