Inspirational Clients: An Interview with Olivia Robinson – Founder of BlackDollar 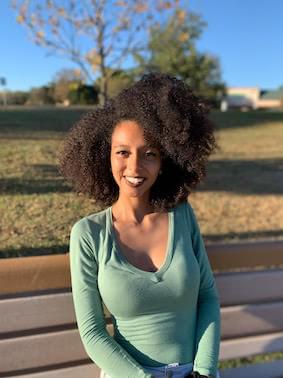 In the first of a series, we bring you the fascinating story of our client Olivia, what led her to become politicised and how she is making a positive change to Black Businesses in the US with her app, BlackDollar which launched on Friday 20th November.

Hi Olivia, I know you grew up in the relative calm of a small town in California, but tell me about your mixed race parents and some of the problems they encountered living together in the 80’s.

Hi James, thank you so much for having me. While I was born and raised in Southern California, my parents (my beautiful, black mother and my daring white father) had married in Alabama in the 1980s, which was still greatly segregated and hostile towards interracial couples. Just prior to their wedding, a black man was lynched for marrying a white woman. My parents ended up having to privately move their wedding date sooner because of a plot to bomb the church their ceremony was supposed to be held in. They later moved to California to raise my siblings and I, and although I arrived much later into their marriage, conversations regarding racial intolerance and the need for progress were still very alive and present in our day to day dinner table conversations.

Tell me about growing up in California, did you become political and aware of race as an issue from a young age? Who and what were your influences?

Race and politics were an evolving conversation within my household from as early as I can remember. Growing up on the east side of Palmdale, CA, a town northeast of Los Angeles, I got to be around a great deal of diversity of race, nationality, religion, and thought. With the exception of required readings from my parents, my early influences on my understanding of race came from school and church, which provided me with many notions that I would need to unlearn as I grew older in order to have a more accurate understanding. The cultural, literary, and scholarly influences that broadened and deepened my awareness the most were the mini-series Roots, Ralph Ellison’s novel Invisible Man, and works from authors such as W.E.B. Du Bois, bell hooks, and James Baldwin.

Your parents moved to Texas when you were 16. How was Texas different to California and what were your experiences living somewhere more conservative?

Austin, Texas was the first place I ever recognized what minoritization looked like. In California, the minoritization of Black communities was still present, but it presented itself more inconspicuously within the infrastructure of systems and institutions. In Texas, I experienced less openness from people in discussing differences and solutions because of less acknowledgement of existing inequalities and disparities. I had moved to Texas in the wake of murders of young black men such as Mike Brown, a time when I was coming to an understanding of what my own Blackness meant in a country that consistently demonstrated it’s hatred towards black and brown people. Although Texas was not a pleasant environment to process this in community, I personally view the dichotomy between Texas and California as a lesson that solidified my mission for pursuing equity and inclusion in all that I would do in my future, especially in college and transitioning to Trump-led America.

You just graduated from Pepperdine University in California where you became President of the Black Student Association. Tell me how you used this platform to make changes for students?

I began organizing for changes in the university prior to receiving a title within BSA because as a conservative university with an unreconciled history in the wake of the Trump era, Pepperdine presented a surplus of barriers to Black students being able to feel safe, acknowledged, and appreciated on campus. Leading BSA alongside a board of liberation-minded peers allowed me to continue action-based dialogues with university administrators and staff that strategized how to tangibly create greater inclusion. More importantly, I believe, I used my time as a leader in BSA to cultivate a space that embodied community and joy among ourselves regardless of the postures and attitudes of the institutional, political, and social environment around us.

What was the ‘lightbulb’ moment you realised that you wanted to create an app to promote black businesses?

Black economic liberation was something I came to understand more thoroughly as I saw videos from pop culture figures such as Jay-Z and Killer Mike. Years ago, the idea for an app displaying Black owned businesses crossed my mind as a possible endeavour for the distant future. But in December of 2019, after purchasing each Christmas present for my family from Black owned businesses, it dawned on me that people who support the importance of buying Black would do so more habitually if there was a mobile resource that directed them towards what they sought. After seeing the cost of what it would take to create the entirety of my vision, I did not see creating an app as a sensible pursuit on a college student budget. However, amidst the webinar binges that occupied me for the 2020 quarantine period, I saw a webinar that explained how to create an app affordably. With a quick prayer and a giant leap of faith, I set out to create BlackDollar with the money I had made during college. The rest is history in progress.

Tell us more about your app, BlackDollar, and how it can be used by businesses and consumers?

BlackDollar helps people find Black owned businesses throughout the US. For online businesses people can use the search bar to find a location that fits their needs. For brick and mortar businesses, a subscription-based feature, people can sort by category to find various businesses and view the official directory map. There’s also an engagement section for people to connect and share recommendations and information. We find a large percentage of Black-owned businesses on the app through data searches, but we also have a form that people can submit to ensure that we upload specific business. The app helps users to intentionally purchase Black-owned goods and services for the purpose of maintaining a greater percentage of wealth within the Black community, which is vital given that the buying power of the Black community in the US is expected to increase to $1.5 trillion by 2021. One of the core messages I try to emphasize within BlackDollar’s branding is that you don’t have to be Black to buy Black. Non-Black people who understand the value of spending money on Black products and services are also an important part of our target audience.

What’s the vision for your app going forward?

I have so much in mind for the growth of BlackDollar, and I genuinely see the app shifting the rate at which consumers intentionally buy Black. In the near future, I want to incorporate information on financial literacy, Black-owned stock info, a loyalty program, and several more innovative ideas that will both create a quality resource for consumers of Black goods and services and Black business owners and also further the mission of achieving liberation through Black economic freedom. Because nearly all components of my app and business thus far have been funded by my own personal savings, I’m limited in expanding my team and capacity to the level my vision requires. I’m confident that BlackDollar’s success will create revenue that will support this growth. Nonetheless, I am still interested in finding investors who will contribute to BlackDollar’s further development.

Finally, 2020 has been some year. I want to understand how big themes running through the year such as the Trump-Biden election, Black Lives Matter and Covid may provide momentum for your app and black businesses in general?

Whew, there are a lot of directions I could go with answering that, but in simplest terms I believe the intersection of each of these aspects this year have set the movement for social and economic revolution into a higher gear. Increased attention on the impacts of these factors is without a doubt a pull factor for new tools like BlackDollar in certain circles. As much as I expect this to be positive momentum for the app and other Black owned businesses, BlackDollar’s mission is to contribute to the momentum of these themes themselves. BlackDollar will outlast the energy of the existential era of 2020. My hope is that the pace of the movement will continuously increase with the help of innovations for Black economic empowerment like BlackDollar.

Olivia, it’s been great to talk to you. All at Redbox Mobile are proud to be working with you and wish you continued success with your business.

Thank you so very much.

If you’d like to reach out to Olivia as a business or consumer, feel free to send her a message on LinkedIn or via email at olivia@blackdollarapp.org

ASO, Screenshot Design & Build and Apple Search Ads all provided by Redbox Mobile. Visit the Redbox Platform to find out how to increase user engagement and downloads for your App.